How to improve your creative presentations 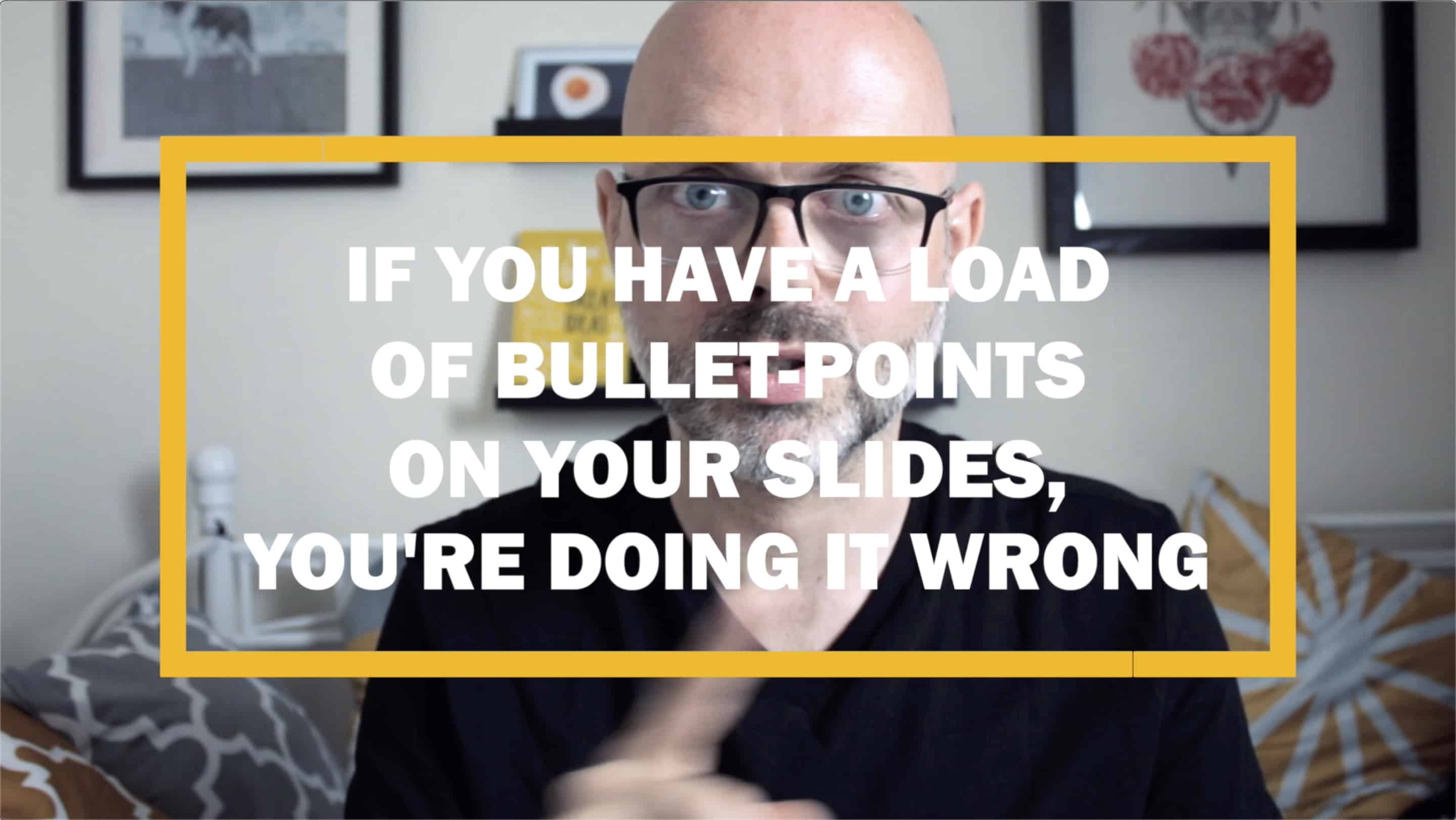 This is the full transcript of the YouTube video on preparing creative presentations. It may not read well because – let’s be honest here – I don’t speak very well. So I recommend you watch the video instead.

And while you’re at it, please subscribe to the channel. I need to reach 1000 subscribers so that I can take the channel to the next level and start using it as part of my business. I’d really appreciate it if you could help me with that.

HOW TO IMPROVE YOUR CREATIVE PRESENTATIONS

I’m Dave Birss. And in this episode I’m going to be telling you how you can prepare a more effective creative presentation to sell your creative ideas.

In this episode we’re going to be looking at what you do after you’ve got your amazing ideas. How to give them the best chance of the client actually buying them. And in this video we’re focusing on how you prepare the best kind of presentation.

I’ve got four points here that I want to talk about, so let’s get started.

Hold off on opening PowerPoint for as long as possible. Maybe even forever. Your job is not to create a deck that fills an allocated slot of time. Your job is to convince somebody who has a problem that you have a solution. The way you do that is by focusing on constructing your argument. And what I recommend you do is that you get some record cards or even Artefact Cards – which I’ll give you a link for down there – and you write one point per card and then you lay them out. You shuffle them until you’ve got the right order that you’re happy with. And that then forms the body of your argument – the things that you are wanting to say to get across to the client.

Then you need to focus, not just on delivering that as raw, dusty, dry facts, but on how you can create an experience that’s going to make them feel something. That is going to make them feel that this is the right decision for them to make. One of the things that I recommend for many of my clients is that they separate the idea of a presentation from a document. They take all the stuff that’s maybe a bunch of charts, there’s some dry facts, there’s some statistics – and they put them in a nicely bound document. And instead of creating this boring section in the presentation, they actually say, “Look! Here’s a document with all the interesting facts. I’ve put some post-it notes in it for things that we think would be interesting to you. We can go through that afterwards. But let’s get in to the good stuff!”

TRY TO DESTROY YOUR GREAT IDEA

OK so you’ve got your fantastic idea. You’ve got this wonderful piece of treasure that you want to take to the client. The first thing that I recommend you do is you try to rip it apart. You hold a meeting and you look at it and you try to come up with every objection that the client might come up with. Even the stupid ones. Even the ones that are going to annoy you. Now, in your meeting, you’re going to go through each of these objections and you do one of two things. You either use it to improve your idea – to make your idea as strong as possible.

The second thing is, if it’s not something that’s going to improve your idea, you’ll work out your defence for it. You hopefully do a judo move and you take the negativity of that comment and you turn it into something that’s a positive. Because you want to have a defence for every attack that is made on the idea.

One of the most common client comments I’ve heard over the years is, “Can you prove that this will work?” Of course, if it’s something that’s truly new – something that’s fresh or original – then the answer is probably no. That’s what I used to think anyway. Now I’ve actually changed my mind. I used to roll my eyes at that question but now I think it’s perfectly reasonable. I think is a perfectly rational question. The client has money. They want to know that they are going to be spending it responsibly and that’s all they’re doing.

All you need to do here is build their confidence by showing that there’s less risk in the idea than they thought. There are some ways of doing that are are actually quite simple. Not that time consuming. If it’s a physical thing, create a prototype. You could keep it simple. The prototype could actually just be out of plasticine so that people can understand how it sits in the hand. Or it could be 3D printed – it’s really cheap and easy to do that now. It may be that you want to create another kind of prototype if it’s digital. You can actually create a digital prototype just using PowerPoint so that when you click on buttons it can take you through to different options so you can get to understand the interface and how it works.

Or it might be that you just want people’s opinion. You can just get a bunch of friends on Facebook, ask them some questions and get some feedback. You could do a poll round about the office. You could maybe get people from within the industry to ask them what they think of your idea and how they would respond to it. All of that stuff is going to increase the client’s confidence and give them a far higher chance of saying yes to your idea.

The last thing I want to talk about is actually preparing to deliver the presentation itself. There are some companies I’ve worked in where they’ve totally over-rehearsed it. They rehearse it to the level that it’s just embarrassing. It’s just lost all of its life. Rehearsal is important but not until the point that it feels scripted. What you need to do is you need to understand your subject. You need to understand what the objections are. You need to know a little bit more than you’ve got in your presentation so that you can answer questions when they’re thrown your way.

If you’re doing something that’s scripted, it means that there’s really no chance for the audience to get involved themselves. For the client to properly be able to ask questions and to make it feel as if it’s a natural kind of conversation – which is far more persuasive than just preaching.

One of the things that I often talk about is how many ideas are re-combinations of existing elements. It’s bringing this element and this element together to create something new. So I want to show you a site here called Seenapse. Now, Seenapse has got this wonderful aim of trying to map connections between things. And what you do is you go along to the site, you type in your subject area or the object that you’re interested in, and it will come up with a list of results that are things that that connects to. And it might be able to give you connections that you’d never previously considered. Which means that you will be able to have ideas that you could never previously have.

I just love the idea behind the tool. It’s created by Rafael Jimenez in Mexico and he’s created this community where people will contribute their own ideas. When somebody is looking for connections he’ll put out to the community and say “what connections do you have as well?” So he’s crowdsourcing, creating this hive mind of connections between objects. I think it’s a wonderful, wonderful idea. Go along to seenapse.it – the link is down there in the blurb – and see if it helps you create connections that you would not previously have made. Or maybe just get involved in the community to come up with your own connections as well. So that’s a tool that might be able to help you have ideas that you wouldn’t normally have.

That’s all from me just now. If you found any of this helpful then please click the Like button. It helps other people discover this content as well. And most importantly it just gives me a little bit of encouragement too. So subscribe if you’ve not subscribed. Click the little bell icon to get notifications. Comment. Let me know what you think. Have you got any other points that you think that I’ve missed? Have you get anything that you disagree with? I want to hear from you. But that’s it! I will hopefully be seeing you back here again soon. Big love to your beautiful brain.