Your creative mind needs a holiday 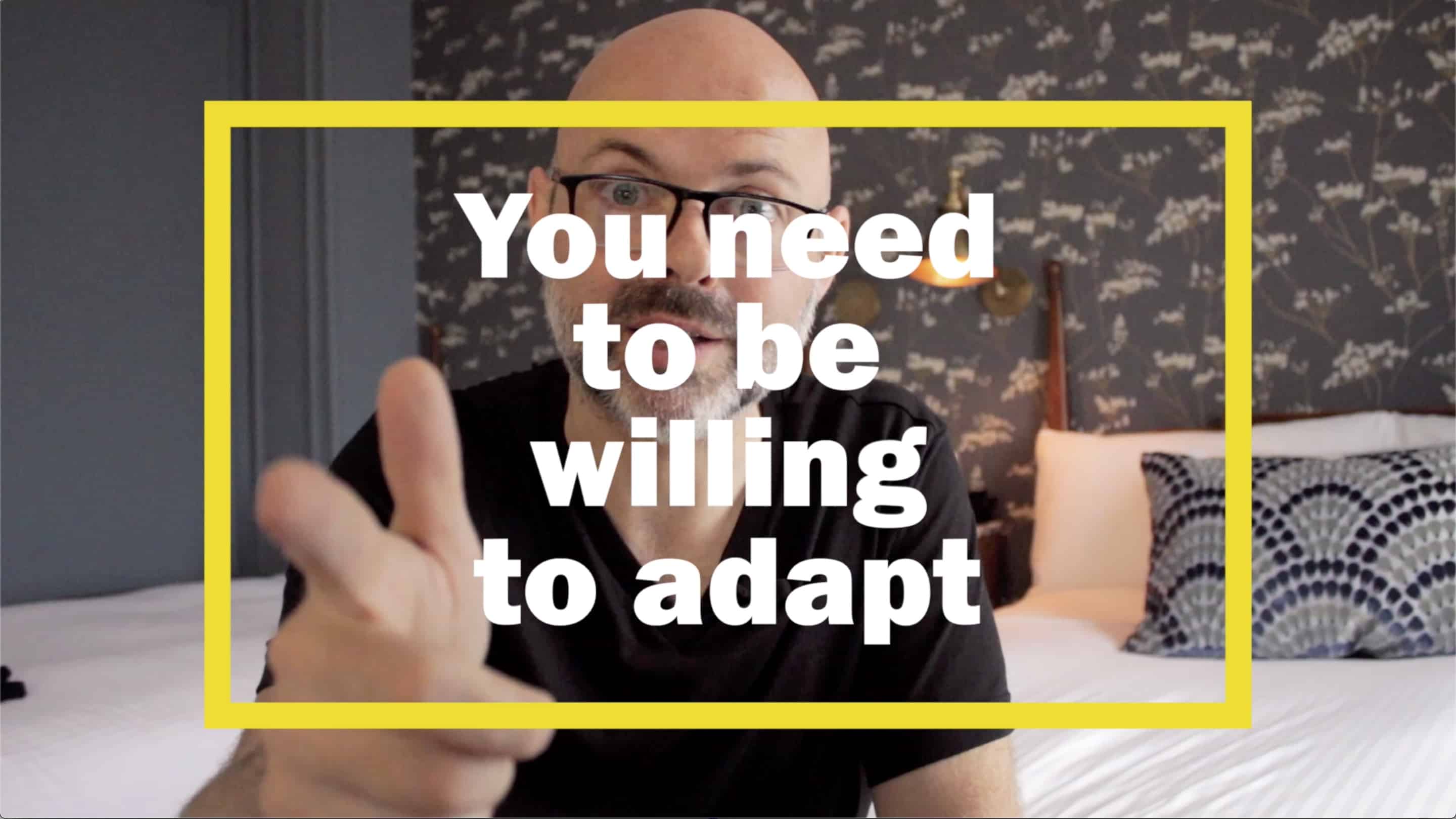 Last week I ended up having a super quick visit to L.A. to run a couple of workshops. It was so quick I had absolutely no time to see anything other than the conference room and the hotel. But I took the opportunity to get up early and shoot this film about the impact of travel on creative thinking.

I look at some academic studies that show different aspects of it. The first of which shows the negative impact of being a racist. I particularly like that one.

If you like this, please subscribe to the channel. There’s lots more like this on the way. And if you prefer silence to the sound of my Scottish drone, you can read the transcript below, with the weird way I talk built right in.

HOW TRAVEL IMPROVES YOUR CREATIVE ABILITIES
(IF YOU LET IT)

And in this episode I’m going to be talking about the effect that travel has on the creative mind. But I’m not doing it from here. I’m doing it from L.A.. So come and join me.

Hello and welcome to L.A..

This is my hotel room in the historic Culver Hotel. It used to be owned by Charlie Chaplin and then it was owned by John Wayne. And this was where the cast of The Wizard of Oz used to hang out when they were filming just across the street. So I feel very fortunate to be here.

But I also feel very fortunate to be able to travel as part of what I do. I get to meet incredible people. I get to have experiences I wouldn’t normally have and that gives me input that helps me.

So in this video, I actually want to talk about the importance of travel for creative thought. Because it has a huge impact on the way we think.

BE MORE OPEN TO POSSIBILITIES

You know, in the 1860s as Mark Twain, the famous author, did a tour around the coast of the Mediterranean. And on his way around he spoke to people. He got to see different cultures. And he wrote a book about it. And one of the things that he wrote in that book is that

“Travel is fatal to prejudice, bigotry and narrow-mindedness”.

And, you see, I totally agree with him. When you travel, you find that there’s different ways of doing things. And it breaks down your fear of otherness. So on a simple basis, if you imagine that breakfast to you might be a bowl of Corn Flakes and a cup of coffee. That’s the way that you think it’s always done because you’ve always done it. Your friends have breakfast that way. Your family always had breakfast that way. So that’s what breakfast is. To other people it might be a full fried breakfast. To other people it’s a stack of pancakes. If you go to India you might even have curry for breakfast. If you’re in France it’s dipping a croissant in some coffee.

In fact, there was a study that was done by the University of Tel Aviv in 2012. They took two groups of people. One group of people had, as they put it: “they believed that racial groups had fixed underlying essences”. In other words, they were a bit racist. And the other group were people who would look at culture and look at difference and not see it as being particularly important. They gave these people creative tests. And which group do you think performed better? Well, naturally it was the people who were open to difference. It was the people who didn’t see difference as being a problem. Being a bit racist, being ethnocentric, thinking that your way of doing things is the only way of doing things, led to worse ideas.

And I believe that that’s absolutely true. Openness helps us get ideas that we wouldn’t normally have.

Bear with me a second. [drinks coffee]

DEVELOP MORE PATHWAYS IN YOUR BRAIN

The way that our brains get wired is based on experience, it’s based on the people that we surround ourselves with, it’s based on the habitual stuff that we do. When you travel – when you’re exploring all these other ways of doing things – it starts to build up different wiring in our brain. So the wiring that had been reinforced out of habit and out of this influence of the environment around us, it ends up creating competing pathways with that. So this new wiring that you put in allows you to have more flexibility of thought, more, sort of, cognitively diverse approaches to things.

And that, again, allows us to be able to access ideas we wouldn’t normally have. But you need to be willing to adapt.

The old cliche of the British people who go on holiday to the south of France and in their suitcase they pack teabags, they pack baked beans, they pack Marmite and everything that feels British to them. They take it with them because they don’t want to experience something that feels “a bit foreign”. That stuff doesn’t help you.

So it’s possible to travel and not get any benefits from it. It doesn’t build up that extra wiring because all you’re doing is reinforcing your existing wiring; your existing way of doing things.

GIVE YOURSELF DISTANCE FROM A PROBLEM

You also find that you can get some of the benefits of travel without actually travelling. So it’s possible just by giving yourself perceived distance to a problem that you can actually solve it more effectively.

So at Indiana University, they did this study where they got people to try and solve some puzzles. They told half the group the puzzles were created at the University in Indiana. And they told the other half that they were created in California. And they got to measure these two groups to see which group was better at solving the problems. And they found there was a distinct difference. The people who believed that the puzzles have been created in California – so there was a perceived distance between them and the puzzles – had far more creative approaches to trying to solve it. And also they were more successful at getting to the solutions.

So actually just giving yourself a little bit of distance might be enough to help you solve a problem more effectively.

Now let me tell you about a university researcher at Columbia Business School. His name is Adam Galinsky and he’s particularly interested in travel and the effect that it has on the creative brain. He got together with some other researchers and they looked at the creative directors of 270 top fashion houses. They looked at their schedule to see what their travel was like and then they looked at their output. And they judged the output of the designs that they created. And they did that by getting people who were in the industry who would normally judge stuff – so buyers and journalists – to see which was the more creative designs that they were producing. They were looking for innovative approaches to design.

And they found, again, there was a massive correlation to how well-travelled someone was and how creative their designs were. In fact, they looked to see people who had lived overseas and worked overseas and immersed themselves in the culture for a period of time by living and working there – and discovered that they were more creatively consistent over time than people who just lived in the same place they had been brought up. It seems as if actually immersing ourselves in a culture – truly, truly immersing ourselves in the culture – really is the thing that makes the difference.

That’s all I wanted to talk about today. About the importance of travel on the creative mind. If you find this at all useful then please like it, because that’s what you’re supposed to do when you like a video. You hit the ‘like’ button. Get a mallet out, smack that key as hard as you can so that maybe it just gives us a few extra likes – like a test your strength machine at a fairground. I’m hoping that’s how it works. Subscribe if you’ve not subscribed. Comment. Tell me is there anything else you think we can learn. Tell me if you disagree with any of this. I want to have a conversation with you, so I’m hoping that you will come back to me with some stuff that I can respond to.

I’m off now to run a second day of workshops here in L.A.. This is about helping people think things through. Helping them get realisations that they wouldn’t normally have. And then come up with ideas that are going to be valuable to them. I love that stuff.

That’s it for me. I want you to look after yourself. I’m going to try and look after myself here in L.A. before I fly home tonight. It’s a super quick trip! I’m exhausted. So in the meantime, big love to your beautiful brain.